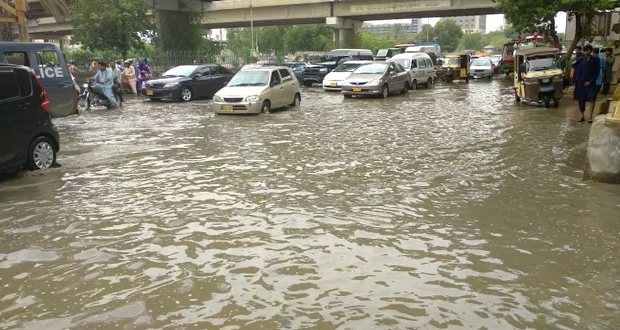 According to the reports, heat-stricken residents of Karachi received a respite from the sweltering heat as the rain turned the weather pleasant.

Meanwhile, the traffic has been severely affected due to standing water on the roads.

The flyover of Nagan Chowrangi was flooded after which it was closed for traffic. Drainage was nowhere to be seen. Water accumulated on Defence, Clifton, Shahra-e-Faisal and University Road. The highest rainfall of 41 mm was recorded at Saadi Town. However, it is feared of urban flooding due to continuous rains in Karachi.

On the other hand, the torrential rains that followed the heat changed the temperature in the city and reduced the intensity of the heat. Knee-deep water accumulated in many places, power supply was also suspended in different areas after the rains.

The power supply was suspended in most parts of the city. Many of K-Electric s feeders tripped. Electricity was cut off in Gulistan-e-Jauhar, Gulshan-e-Iqbal and Shah Faisal Colony.

After the rain, Karachi Administrator Barrister Murtaza Wahab visited different areas of the city. He reviewed the drainage arrangements in the metropolis and directed the staff to remove water from roads immediately.