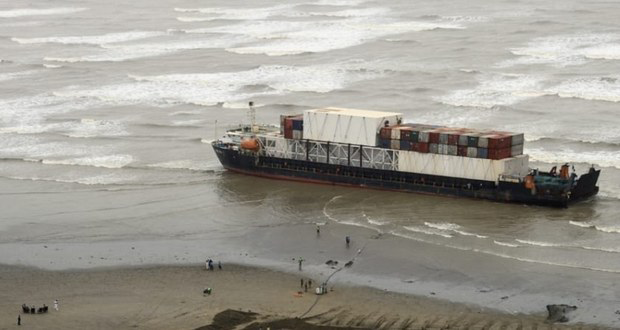 KARACHI: The salvage operation of a cargo vessel grounded at Karachi’s Seaview beach put off to next month after another rescue effort ended in failure on Thursday.

Now, the owner of the vessel decided to send team from Dubai to kick start the operation again from next month.

In another effort to tug stranded Cargo motor vessel (MV) Heng Tong 77, three ropes tied with the ship were snapped after it was dragged by 12 to 15 meters. The vessel returned back to its previous position after iron and nylon ropes tied with it were snapped during the tugging effort.

The salvage operation of the ship has been deferred to the next month as the window of high tides in the sea has subsided with the waning moon, according to sources.

“The effort to re-float the ship will likely to resume again on September 06 to 08. A final date for resumption of salvage operation will likely to be given after the situation of tidal waves in sea,” sources said.

The vessel MV Heng Tong 77, which is 98 metres in length and 20 metres wide, with a capacity of 3,600 deadweight tonnage, was said to be waiting for a crew change outside the Karachi harbour while on its way to Turkey from China last month when tidal waves caused it to lose its anchors and start drifting towards the shore.