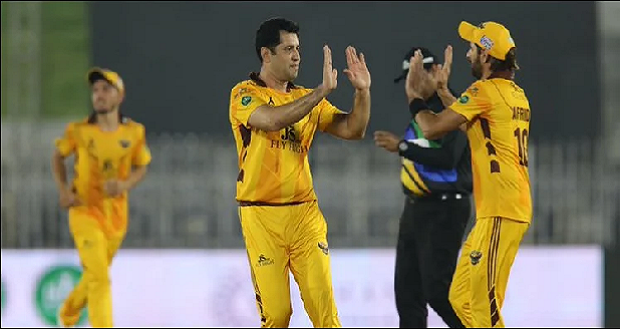 MUZAFFARABAD: Asif Afridi bowled the last over brilliantly to restrict Muzaffarabad Tigers to 162-9 and lead his team Rawalakot Hawks to winning the inaugural season of Kashmir Premier League (KPL).

Tigers needed 10 off the last six balls and opponent’s skipper Shahid Afridi handed the ball to left-arm spinner Asif. He responded well and took three wickets in the over to hand a convincing seven runs victory to his team in the final.

Earlier, Kashif Ali continued his form and scored 54 runs in an all-important final to lead his team to 169-7.

Sent into bat first, openers Umar Amin and Bismillah Khan provided a solid start to Hawks in an all-important final contest. They made the most of the powerplay and scored 53 runs together in 6.3 overs.

Bismillah scored 30 runs off 19 balls with the help of four boundaries and a six whereas Umar made 23 before falling to Mohammad Hafeez.

Sahibzada Farhan scored 28 runs off 21 balls with the help of a boundary and two sixes followed by an eye-catching knock of Kashif which included five boundaries and three sixes. Mohammad Imran Randhawa made 17 off 12 balls including two boundaries.

Hafeez and Usama Mir bowled well for the Tigers as they both took two wickets each. Mohammad Wasim Jr and Arshad Iqbal took a wicket each.

Set to chase 170, the Tigers started off well with openers Zeeshan Ashraf and Hafeez scoring 54 runs together in 5.2 overs. Hafeez made 29 including six boundaries whereas Zeeshan smashed 46 off 26 balls after surviving on a no-ball. His inning included four boundaries and as many sixes.

Sohail Tanvir resisted with his 21 runs knock followed by Wasim Jr who smashed 22 off 12 balls to bring back the Tigers in the game. He smashed a boundary and two sixes.

But, Asif had other plans to lead his team to victory by bagging three wickets. Afridi also bowled well and picked up two crucial wickets alongside Hussain Talat who bagged three wickets.