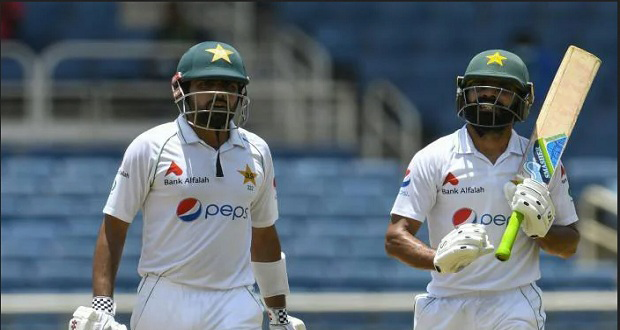 KINGSTON: Babar Azam missed out on a hundred but Fawad Alam may yet have the chance to reach three figures after the pair lifted Pakistan from a horrific start to end day one of the second Test against the West Indies in relative comfort at 212 for four at Sabina Park.

Babar s composed 75 through almost five hours at the crease and Fawad s typically pugnacious 76 before retiring hurt from severe leg cramps just after tea rescued the tourists from the depths of three for two.

Kemar Roach once again led the charge with the ball for the home side, taking three for 49 off 17 overs, striking in his first two overs of the match.

He then returned in the final session to claim the all-important wicket of Babar when the Pakistan captain appeared to be moving serenely towards a sixth Test century.

His fourth-wicket stand with Fawad was worth 158 when the awkward-looking left-hander had to limp off the field on a sweltering afternoon in the Jamaican capital where temperatures hit 34 degrees.

Those dehydrating conditions also claimed West Indies wicketkeeper Joshua da Silva who was replaced by Jahmar Hamilton for the rest of the day when the first-choice gloveman left the field just before tea.

Despite Babar s dismissal and the temporary loss of Fawad, Pakistan remain on course for a challenging first innings total with Mohammad Rizwan and Faheem Ashraf set to resume on the second morning in a fifth-wicket partnership that has added 44 runs.

That promising position was in stark contrast though to the situation Pakistan found themselves in when they were tottering at two for three just four overs into the day.