Opposition’s Long March:Lawbreakers Will Be Dealt In Line With Law: Rashid 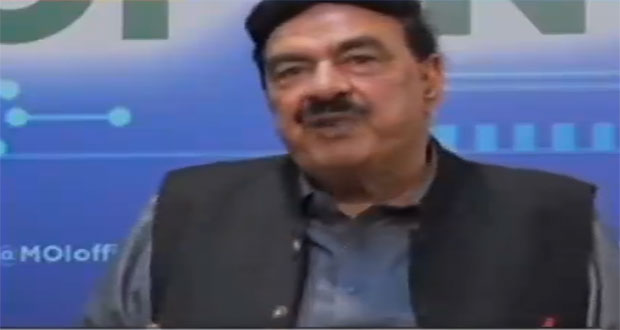 Islamabad: Interior Minister Sheikh Rashid Ahmed says that the Taliban have assured to not let TTP use Afghanistan’s soil against Pakistan.

Talking to media in Islamabad on Monday, he said Pakistan Army is present along the border with Afghanistan to defend every inch of the motherland. He said around 2690 kilometers of Pak-Afghan frontier has been fenced.

The Minister said Pakistan is a responsible country and is fully capable of taking care of its national security and to come up with the international expectations. He said Pakistan has made history in facilitating peace process in Afghanistan. He said the world should also not forget that Pakistan has rendered around 80,000 lives in fight against terrorism.

Regarding any possible influx of people from Afghanistan, Sheikh Rashid said that we have made arrangements to accommodate 3,000 people in Islamabad only. He said any person from any nationality, who comes to Pakistan from Afghanistan, will be granted a transit visa of 21 days.

Answering a question, he said so far 1627 people have come through air route, while over 2100 people arrived through land route at Torkham. He said we were expecting a huge refugee influx from Afghanistan, but not a single person came to Pakistan as refugee.

Replying to a question, the Minister made it clear that all Pakistanis have been evacuated from Afghanistan and only 30 to 40 people are there, who themselves do not want their repatriation.

Talking about opposition alliance Pakistan Democratic Movement’s announcement of launching a march against the government, Sheikh Rashid Ahmed said that the opposition has nothing to sell and is unable to predict the future scenario of regional politics.

He said Pakistan is going to become a center of the international politics, but the opposition is not realizing its responsibility. He said no hurdle will be created in the way of opposition’s long march, but lawbreakers will be dealt in line with the law and the constitution.