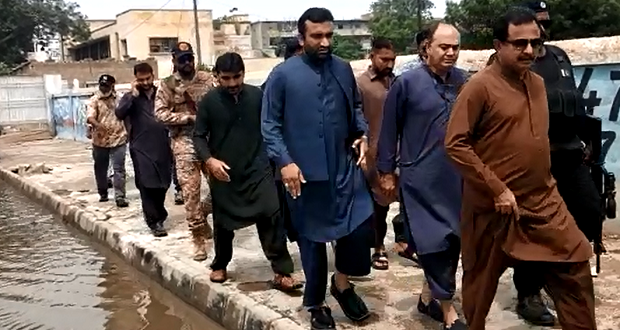 The opposition leader along with PTI member Sindh Assembly Saeed Afridi and others visited New Karachi, Liaqatabad, Garden, Banaras and other areas and expressed concerns over accumulation of drain water on roads, streets and houses. He said that residents of many localities of the city were facing problems due to poor drainage system and accumulation of sewerage water on roads and streets.

Haleem Adil Sheikh expressed grave concerns over accumulation of sewerage water in a government Primary school at village Khamiso Brohi North Karachi. He said that due to negligence of relevant authorities school building was in dilapidated condition and lives of over 200 children studying in the school were in danger particularly after accumulation of sewerage mixed rain water.

Due to negligence of education department the school has become gathering place for drug addicts, he said adding that the inundated school was situated in the village where people vote for PPP but their leadership had done nothing for their voters.

Haleem Adil said that PPP Sindh government has damaged basic infrastructure of the economic hub of the country and residents of Karachi were facing hardships while Murtaza Wahab was doing photo sessions on Shahra-e-Faisal.