Govt Electoral Agenda As Per Recommendations Of Judicial Commission: Fawad 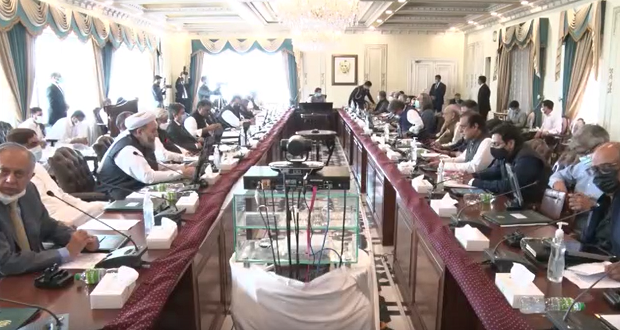 Islamabad: The Federal Cabinet has stressed that India should not interfere in internal affairs of Afghanistan to sabotage regional peace.

Briefing media about the decisions taken by the Federal Cabinet which met with Prime Minister Imran Khan in the chair, in Islamabad on Tuesday, the Information Minister Chaudhry Fawad Hussain said the Cabinet also urged the international community to take notice as Indian involvement in Afghanistan’s internal affairs is aimed at creating chaos that cannot be justified in anyway.

He said Pakistan is playing a responsible role for an inclusive set up in Kabul and is pursuing consultations with China, Turkey and regional countries.

Fawad Hussain said we are trying to create the environment for evacuation of stranded foreigners in Kabul.

He said so far over 3400 people have been evacuated through air routes while 90,000 people were received on borders.

The Minister said PIA has evacuated around 1500 people. He said our air and land borders are open for the foreigners stranded in Kabul and we welcome those who are coming on valid reason to Pakistan.

He said Advisor for Parliamentary Affairs Babar Awan briefed the cabinet about legislation on electoral reforms and Electronic Voter Machines.

The Minister said it was noted that opposition is making efforts to deprive nine hundred thousand overseas Pakistanis of their basic right to vote.

He said the cabinet condemned the attitude of the opposition for creating hurdles in government’s electoral reforms agenda.

The Minister said our electoral agenda is in line with the recommendations of judicial commission that was appointed for reviewing transparency in 2013 elections.

Fawad Chaudhary said regarding Coronavirus pandemic situation, the cabinet was informed that due to increase in Corona cases almost 70 percent of Oxygen supply capacity is being utilized at the moment and the health systems of Khyber Pakhtunkhwa and Punjab are under great pressure due to increasing number of Corona patients.

He said a high-level committee is being formed comprising Ulema, intellectuals and members of civil society to make recommendations for legislation to protect women and get rid of such incidents similar to Minar-e-Pakistan incident on 14th of August.

He said the cabinet also fixed the prices of 37 new medicines whose manufacturing has been started in Pakistan.