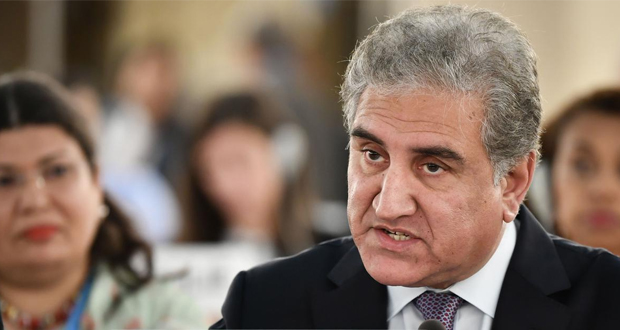 Islamabad: Foreign Minister Shah Mahmood Qureshi says peaceful Afghanistan is of great importance not only for the region but for the entire world.

Talking to his Saudi counterpart Faisal bin Farhan on telephone on Monday, he said we hope that Afghan leaders will move forward with an all-inclusive set up for durable peace in Afghanistan.

The Foreign Minister urged the international community to play its role for reconstruction and development of Afghanistan.

Shah Mahmood Qureshi thanked his Saudi counterpart for calling the meeting of OIC’s permanent representatives on the evolving situation in Afghanistan.

The two Foreign Ministers expressed satisfaction over the level of bilateral contacts regarding current situation.

Meanwhile, Foreign Minister Shah Mahmood Qureshi says Pakistan has consistently advocated for an inclusive political settlement in Afghanistan as the best way forward and has been supporting efforts in that direction.

Talking to his Swedish counterpart Ann Linde on telephone on Monday, he underlined that no other country wants a peaceful and stable Afghanistan more than Pakistan.

Shah Mahmood Qureshi emphasized that the immediate priority is to ensure safety, security and protection of rights of all Afghans.

He said that as a responsible member of the international community, Pakistan is fully facilitating several European countries, international organizations and media agencies to evacuate their nationals and others from Afghanistan. He said Pakistan’s efforts have been widely acknowledged.

He said international community must show solidarity and support with the people of Afghanistan, both in the humanitarian arena and economic sustenance.

The Swedish Foreign Minister conveyed her government’s deep appreciation for Pakistan’s assistance in the evacuation of Swedish Embassy staff and others from Kabul.

Both the Foreign Ministers expressed the resolve further to strengthen bilateral relations in all spheres especially in trade, education and innovation.