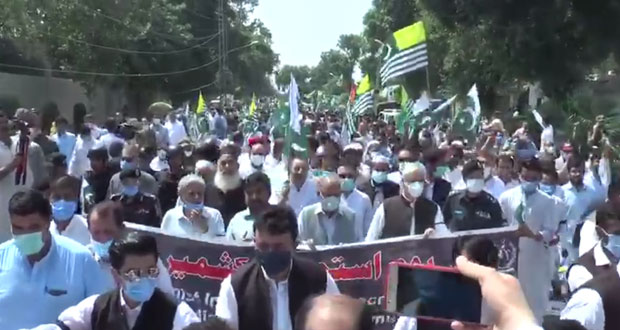 Peshawar: Chief Minister KP Mahmood Khan here Wednesday lead Youm-e-Istehsal rally to express solidarity with the oppressed Kashmiris of the Illegally Indian Occupied Jummu and Kashmir (IIOJK), who were kept under the military seige for the last one year.

Besides others, the rally was attended by members of the provincial Cabinet, advisers and special Assistants to the CM, Chief Secretary Dr Kazim Niaz, IGP Dr Sanaullah Abbasi, officials and people from different walk of life in large number.

Talking to media, the Chief Minister said people of IIOJK was facing worst state terrorism of India for the last seven decades and the fascist India has broken all records of atrocities and cruelty to deprive Kashmiries people of their right of self determination during this period.

He said Modi has started a new chapter of cruelty and oppression against innocent Kashmiries after taking an illegal action of revoking special status of IIOJK on August 5, 2019.

He said Kashmiris of IIOJK were facing worst kind of state terrorism, military seige and lockdowns for the last one year.

“We strongly condemn India’s cruelty, torture and oppression on peaceful Kashmiris of IIOJK and reaffirmed our strong commitment to continue their moral, political and diplomatic support for their right of self determination.

The Chief Minister demanded UN, international community, world supper powers and champions of humans rights organisations to come forward and end the one year long military seige and lockdowns in IIOJK and give right of self determination as promised to them by UN.

He said Prime Minister Imran Khan has effectively raised the issue of Kashmir in all international forums and exposed Indians nefarious designs, cruelties and oppression against humanity before the world.

He demanded resolution of Kashmir issue through UNSC resolutions in accordance with wishes and aspirations of Kashmiris.