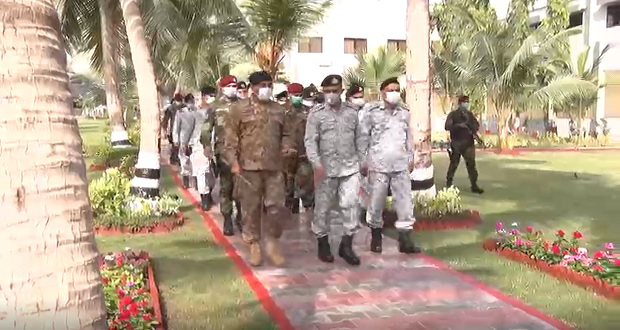 The CJCSC on Wednesday attended the de-briefing session of war game “SHAMSHEER-E-BAHR-VIII” as Chief Guest at Pakistan Naval Ship Base Jauhar, Karachi where he was given a detailed briefing on the aim and objectives of the exercise, said an Inter Services Public Relations (ISPR) media release here received.

This exercise was aimed at tri-services operational drills and maneuvers against traditional and non-traditional threats with emphasis on improving synergy and jointness in operations at sea in a diverse maritime environment.

Speaking on the occasion, CJCSC highlighted the importance of war games in reviewing military strategy and refining its alignment with national security threats while exploring new concepts.

Chairman JCSC lauded the participants and appreciated the efforts of Pakistan Navy in conducting the successful exercise in a befitting manner.