Afghanistan Soil Will Not Be Used Against Pakistan: Sheikh Rashid 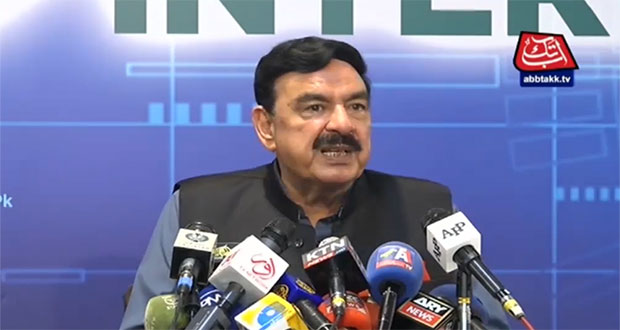 Talking to the media persons in Islamabad on Monday, he said all the relevant departments are working on it. He said the CPEC companies are being provided security cover by the Army.

Alluding to the recent terror attacks, the Interior Minister said international conspiracies are being hatched to sabotage the CPEC project. He however said Prime Minister Imran Khan is committed to take forward this mega project which is a jugular vein of our economy.

He pointed out that Pakistan and China enjoy close relationship and their friendship is higher than the Himalayas.

As regards the evacuation of foreigners from Afghanistan, the Interior Minister said 1277 have been brought to the country. He said 853 people entered Pakistan through Torkham border. We have issued visas to four thousand people including the Afghan cricket team.

Sheikh Rashid said Pakistan desires peace and stability in Afghanistan. He said peace in Pakistan is linked with peace of Afghanistan adding that Taliban has ensured that that its soil will not be used against Pakistan.

The Minister said six new drones will be purchased and 192 cameras will be installed in Islamabad for its security. He said soon a rescue service will also be started in the capital on the pattern of Punjab Rescue Service 1122.