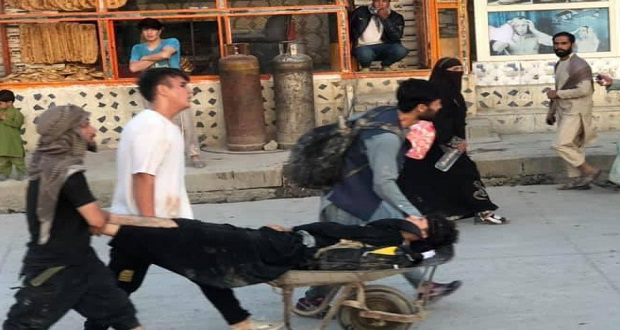 KABUL: Three explosions struck near the main gate of Kabul airport Thursday, causing multiple casualties in what the US military labelled a “complex attack” that took place as countries raced to complete evacuations from Afghanistan.

A Taliban official said at least 60 people including children had been killed and 140 wounded, while witnesses spoke of many more bodies. A surgical hospital run by an Italian charity said it was treating more than 60 wounded. The Pentagon said U.S. personnel were among those hurt.

Video images uploaded to the internet by an Afghan journalist showed a pile of bloodsoaked bodies in a street surrounded by debris. The man filming it was wailing.

The explosion took place amid the crowds outside the airport who have been massing in hope of escaping in an airlift which the United States says will end by Tuesday, following the swift capture of the country by the Taliban.

Mohammad Tawfiq, a resident of the Yaka Toot area adjacent to military section of the airport, told Reuters that a canal near the airport was filled with the bodies of the dead and wounded.

A witness who gave his name as Jamshed, said he had gone to the airport in the hope of getting a visa to reach the United States.

“There was a very strong and powerful suicide attack, in the middle of the people. Many were killed, including Americans, many were killed and many injured,” he said.

Pentagon spokesperson John Kirby said on Twitter: “We can confirm that the explosion at the Abbey Gate was the result of a complex attack that resulted in a number of U.S. and civilian casualties. We can also confirm at least one other explosion at or near the Baron Hotel, a short distance from Abbey Gate.”