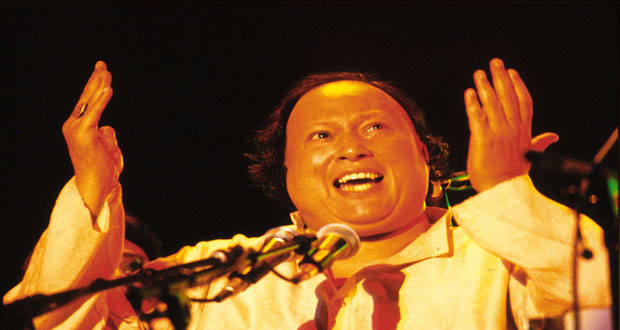 He released 125 albums which is a world record. His qawwalis such as Dum Mast Qalandar Mast, Ali (R.A) Maula Ali (R.A), Yeh Jo Halka Halka Suroor (This light intoxication), Mera Piya Ghar Aaya (My beloved comes home), Allah Hoo, Kinna Sohna Tenu Rab Ne Banaya (How beautiful the Lord has made you) were his most famous ones.

Ustad Nusrat Fateh Ali Khan recited Hamd called Wohi Khuda Hai (He is the God) was well appreciated alongwith a national song Mera Paigham Pakistan (my message is Pakistan). His song Jane Kab Honge Kum, Iss duniya ke ghum (when will the pains of the world end?) for Kashmir is still being sung and listened today.

He has also collaborated with music directors and singers across the world such as Lata Mangeshkar, Asha Bhosle, A.R. Rehman and Peter Gabriel.

The renowned musician won several national and international awards. He was awarded the prestigious Pride of Performance award by the government of Pakistan in 1987.

He passed away on 16th August 1997 due to Lung cancer. His songs and music are still being listened to and sung all over the world.